‘American Royals’ review: why do royals complain so much?

My goal this year is to read 18 books in 2021, and I started with American Royals by Katharine McGee. I chose this book first because I thought it would be a quick read but it was more difficult to get into than I anticipated. Once I was pulled into the stories, though, I did finish it rather quickly. I went in open minded and left with a lot of thoughts.

My overall thought on this book is that every character needed to be aged up at least four years. Three of the four main characters we follow had just graduated high school, making some of the action and drama of the plot seem forced and contrived given their young ages. For example, Daphne at 18 claims to have dated Jefferson for 3 years, which puts the beginning of their relationship when she was 15. She claims the paparazzi had been following her for years, meaning they began harassing a 15 year old yet this is never addressed as a negative thing. The same with all of the romances, these characters are way too young for the type of romantic drama they had – being obsessed with marriage even though they’re so young. If instead of being fresh out of high school they were fresh out of college, the plot could have remained largely similar (instead of “which college are you going to” it would be “what job are you going to get”) but certain aspects would have made much more sense.

There were other details that stuck out as odd and pulled me out of the story, many of which involved the royal protocol. The largest offender was when they told Beatrice the king was dead and that she was queen now: no way they would tell her that information so publicly. That would be communicated privately and then a press statement would be released later.

Another example was the Wawa scene where Nina “marched to the front counter and caught the cashier’s attention” and ordered extra M&Ms in a milkshake. That’s not how one orders food, especially a drink, at Wawa (there’s a specific counter for ordering food, and a separate one where the drinks are prepared). I wouldn’t mind this incorrect detail so much if the fact that it’s a Wawa wasn’t so important to the plot between Nina and Jefferson.

The story took quite a bit to get going as so much of the alternate history of America had to be explained by all the characters in the first many chapters. I would have preferred to get that backstory as it was necessary throughout the story rather than info dumping at the beginning. I knew what I was getting into from the summary of the novel and was willing to jump right into the alternative history. The info dump made the beginning a slog.

I understand what the author was attempting to do with Beatrice’s storyline of questioning whether she even wants to be a royal/desiring a life outside of the royal fishbowl, but the execution left a lot to be desired. Instead of delving into the philosophical questions surrounding class inequality and the downsides of fame, Beatrice spent the entire time complaining that she didn’t get to have a normal life. “[Beatrice] hated that this [royal] life had ruined her for a normal one” – give me a break; there is no such thing as a “normal” life. A rich and powerful person, like a royal, complaining about such things makes them sound incredibly out of touch and uncaring toward people of lower economic classes and the hardships they endure. Because of Beatrice’s complete lack of self awareness, what could have been an interesting story fell completely flat.

The climax of Beatrice’s storyline – standing up to her father – also fell flat. It’s supposed to be such a big moment of Beatrice finally coming into her own and thinking for herself instead of going along with whatever other people tell her to do, but it felt much more like a child thinking they have life all figured out when in reality they have no idea how the world works. No way would Beatrice live down announcing an engagement, breaking it off a week later, and then rushing into another engagement with a different man. Given the sexism the book claims exists in that world, the first Queen of America would be destroyed in the press if she took those actions. But Beatrice doesn’t even consider the consequences of those actions she’s proposing.

The sexism surrounding Beatrice as the first female heir to the throne was not handled well. We were told over and over that the sexism existed but were never truly shown how much sexism existed. Given that this was a major plot point in Beatrice’s storyline, it would have been better to see this than be told it. There were many aspects of the book, like the sexism toward all of the main characters, that needed to be shown rather than told. All four storylines are guilty of this.

While on the subject of Beatrice’s storyline, Teddy should have been a villain. Stepping back and looking at his actions, he was a horrible person. He knew he was coming to the Queen’s Ball specifically to meet Beatrice as a potential husband, and yet he went and hooked up with her sister in a closet anyway? He kept having his fling with Samantha even after starting his relationship with Beatrice, lying to Beatrice about his involvement with Samantha the entire time, and then begrudgingly got engaged because his family is out of money. He then thought he would be able to move from being engaged to Beatrice to dating Samantha like there’s any good way to spin that PR narrative. Teddy should have been set up as a villain out for money who then cheated on Beatrice, because that’s what he was but it was portrayed as if he’s a good person.

Connor was also not a good man. He’s a grown man who crossed the line with his charge and then got pouty because she got engaged, proposed to her with a sharpie knowing full well she couldn’t say yes, and then begged Beatrice to call off an engagement even though that would be a PR disaster. He also threw a cigarette on the ground – littering all over palace property! He’s awful.

Nina’s storyline, like Beatrice’s, could have been interesting if handled well, but it wasn’t handled well. The differences in classes and Nina struggling with the sudden fame and pressure – and the racism and sexism involved – of being thrown into the spotlight because of her relationship could have been explored in an interesting way, but much of this was only touched on tangentially and relegated to only a handful of chapters. Nina was the stronger character out of her and Samantha but Nina fell into the same trap of simply complaining too much. I did appreciate Nina standing up to Samantha toward the end, but the dynamic Nina expressed as problematic wasn’t shown leading up to that moment.

The biggest moment that flew in the face of Nina’s entire relationship with Jefferson was when Nina told Jefferson that Daphne had accosted her and was the one responsible for informing on their relationship to the press. Every interaction with Jefferson prior to that scene had indicated that Jefferson would have taken Nina’s side, but he took Daphne’s side which didn’t make sense. The only reason for Jefferson to take Daphne’s side would have been if Nina had accused him of being a bad person for dating Daphne (or something along those lines), because then he would have been defensive about his own actions and would be defending Daphne as a way to defend himself, but Nina didn’t spin it that way so the entire breakup felt out of character.

Samantha was the worst character, and I’m not sure she was even necessary to the overall plot. Nina could have been Beatrice’s friend or just Jefferson’s friend and things could have played out largely the same; then have Teddy be a villain out for money and you don’t need the Samantha drama at all.

Samantha was the worst type of selfish and lacking in self awareness in that she only cared about her feelings and opinions and never bothered to understand or even ask why other characters made the choices they made. She was so upset that she didn’t get to be with the boy she liked even though she’s only 18 and barely knew him specifically because she was upset Beatrice “stole” him from her. The drama in Samantha’s storyline all comes from miscommunication due to Samantha’s lack of caring enough about other people to ask questions, which makes for the worst type of drama and leaves the reader nothing to relate to or care about.

Samantha’s character arc wasn’t well developed either. The author tried to shoehorn in that Samantha provides the family good, constructive criticism, that she has always been good at understanding people, and that she has a lack of pretension that allows her to connect to people, except that Samantha showed none of those qualities throughout the entire story. Samantha never cared about anyone outside of her own desires, and only ever complained that she was wronged instead of providing quality feedback. The King tells Samantha the “way you make someone feel heard” is one of her most amazing qualities, except Nina called Samantha out on making Nina feel not heard just a couple chapters prior. Samantha’s final comment on her life was that she was “no longer content to let the days skip idly by”, but she had shown no indication of this change at all prior to this thought.

Daphne was my favorite character mainly because she was the only character actively working toward a goal the entire time. None of the other three main characters seemed to have a proper storyline until about a third or half of the way through the book. The main source of conflict in Daphne’s storyline was not miscommunication, which seemed to be a huge plot point in the other storylines. Daphne was also the only character who didn’t spend the entire time complaining about her lot in life without doing something to change it. Daphne’s motivations were clear (her mother conditioned her to advance socially), her actions were thought through (she schemed and plotted her moves well), and she actively worked to advance her own story. The main conflict was an inner one between wanting to be with Jefferson to advance socially and wanting to be with Ethan for lust, but unlike the other inner conflicts of the other main characters, Daphne is self aware of what she wants and the consequences of her actions. Daphne’s chapters were a joy to read.

I hate read all of Samantha’s chapters, and Beatrice and Nina, at times, were hard to get through but I did enjoy Daphne’s chapters quite a bit. I did not hate this book but I didn’t love it either. The issues I have mostly stem from how poorly some things were written and dealt with, rather than a genre issue. Romance/chick lit/”at times a comedy although I’m not sure it was supposed to be” isn’t my preferred genre but I went into it with an open mind; it was the writing and character and plot development that dragged this one down. I’m interested in reading the second one, but I’m not in a rush. 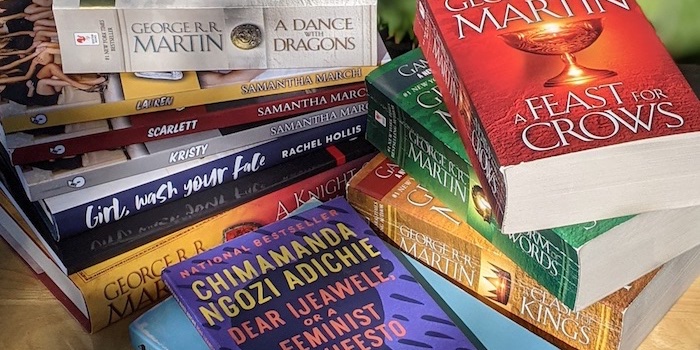