Belle: the reader who stands up for herself 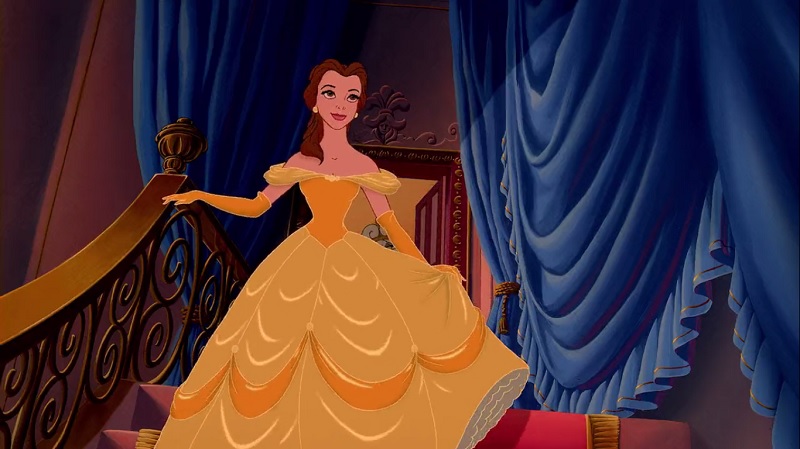 Disney Princesses Strong Female Characters
March 15, 2017February 6, 2021 by JessicaStraw2 Comments on Belle: the reader who stands up for herself

In a continuation of my look at the Disney Princess Pantheon, I’ve taken a closer look at Belle from Beauty and the Beast (1991) to determine how much of a “Strong Female Character” she is and where she fits in terms of other Disney Princesses. I’ll be upfront about it: Belle is not better than Mulan. Not by a long shot. Mulan has much more of a character arc than Belle, who doesn’t seem to have much of one at all. And Mulan is far more capable than Belle in many ways. But Belle does have her positives, and overall is a good character.

Belle begins the film as an outsider who doesn’t fit in with the world in which she lives: she loves reading, and that sets her apart from the rest of her village. The villagers dislike intelligent people, specifically making fun of Belle for loving to read, calling her “strange”, “peculiar”, and “odd”, and making fun of Maurice, Belle’s father, for being an inventor. Belle doesn’t like her village either, wanting something more out of life than what they offer – which is repetitive and boring.

Before Belle even begins her journey, we already know that she is intelligent and willing to stand up for herself – she talks about loving books, and she refuses Gaston’s advances multiple times. Once the plot kicks off, after sacrificing her freedom to save her father, Belle stands up for herself multiple times against the Beast when she refuses to come down for dinner when the Beast demands her to, when she comes down later after he told her she couldn’t have dinner, and when she ventures into the West Wing after being told it’s off-limits.

After the Beast saves Belle from the wolves, there is a moment when she intends to get on Philippe and leave, but she changes her mind and helps the Beast back to the castle and bandages his wounds. Belle defends herself when Beast says it’s her fault he’s hurt, even yelling back at him.

The romance in the film, between Belle and Beast, has been called out by certain groups. I will delve into why those groups are wrong more fully in a separate article, but briefly, Belle does not fall in love with the Beast until she decides to stay and help him, and he starts being nice to her.

Twice Belle saves people by mending them back to health: the Beast after the wolf attack, and her father after he gets sick in the woods. She defends her father from the angry mob when they come to take him away, and she defends the Beast when Gaston whips the angry mob into a frenzy. Belle does try to free herself from the basement Gaston locks her in, but when it comes time to figure a way to get her out, it is actually Chip who thinks of the solution (it would have been great if Belle had instructed Chip to do this, proving that Belle can problem solve, but that didn’t happen).

The final battle in Beauty and the Beast is between the Beast and Gaston, and Belle seems like an afterthought in her own movie. But while the fighting happens between Beast and Gaston, it is actually Belle who saves the day in the end. It’s Belle’s return to the castle that inspires Beast to actually fight back against Gaston, Belle literally saves Beast’s life by grabbing his cloak to keep him from falling to his death (like Gaston), and Belle saves Beast’s life again by telling him she loves him (which turns him back into a human and heals his stab wound).

Belle is less capable than Mulan – Belle is physically overpowered on a couple of occasions (by the wolves, by Gaston), and there is no instance where she shows off any ability to problem solve – but Belle most certainly is intelligent, in that she reads (where other characters cannot), and she verbally defends herself throughout the film. Belle’s strongest quality is the fact that she verbally defends herself and the people she cares about, even when faced with possible death. Plus, she not only saves Beast and Maurice by mending them back to health, but she literally saves Beast’s life at the end of the movie.

So while Belle may not be the most capable female Disney character, she is capable in several ways. She is intelligent, she doesn’t let anyone talk down to her, she stands up for herself and the people she cares about, and she saves multiple people. Belle’s character could be improved, and her story could use a lot of improvement, but overall Belle is a pretty great character with some great qualities.

2 thoughts on “Belle: the reader who stands up for herself”